React Native is an open-source mobile application framework developed by Facebook. It is used to develop applications for Android, iOS, Web and UWP by enabling developers to use React along with native platform capabilities. In addition, an incomplete port for Qt also exists. The working principles of React Native are practically identical to React excluding that React Native does not manipulate the DOM via the Virtual DOM. It runs in a background process (which interprets the JavaScript written by the developers) directly on the end-device and communicates with the native platform via a serialization, batched and asynchronous Bridge.

There are lots of communities continuously growing around the world based on this React Native. Today we will talk about some great blogs on React Native.

There is a blog on React Native on Facebook, where contents are published regularly. You may find any update regarding the React Native framework here. There are also several articles already been published on the blog about various React Native topics. You can go through the list of published articles by the side of the web-page to check them out. Information related to the framework is updated regularly on the blog.

React Native Training is a blog site to train yourself on React Native. This is a Medium-based platform that publishes articles and tutorials on various React Native topics. Lots of tutorials are posted over here regularly. You can pay a visit to this blog site for sure if you are really interested to learn React Native.

Mike Grabowski is one of the best React Native experienced guys out there. He is a associate of a React Native core team and also hugely active in React Native community. Mike routinely speaks and writes about this framework and plays a part to several projects. He is also an arranger of React Native EU 2018, earliest conference in Europe consigned uniquely to React Native. You may follow Mike on Twitter and read his posts on Medium. 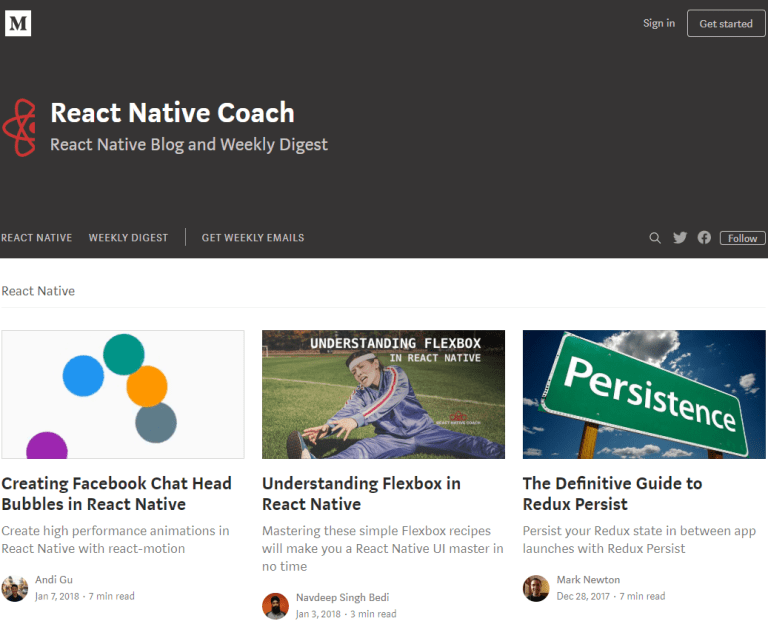 React Native Coach is a blog based on Medium that’s devoted to supplying content on React Native, Redux, GraphQL, and Mobile Design resources. The website is administered by Wyatt McBain, who is a senior mobile developer. It maintains a team of seven writers who publish content on the blog. You can also have subscription to their newsletter to be notified of their any new posts.

Ray Wenderlich is a prominent figure in the software development brotherhood. He has a team consisting of over 100 software programmers and developers; he produces thousands of high-quality resources for coders. So definitely, this is the right place if you are looking for boosting your programming skills. This platform is a fantastic source of knowledge on developing apps. They also cover React Native by providing tutorials like this one from Christine Abernathy from Facebook. If you prefer listening to reading, you should listen to the podcast of React Native Radio. It is created and hosted by Nader Dabit on Devchat.tv. It is a weekly podcast only on React Native. Nader recorded more than a hundred episodes where each show was featuring different guests who are accomplished React Native developers from various startups and companies. Alongside the podcast, Nader also maintains a twitter page regularly so that you can follow the twitter account for any further update Visit Podcast and Visit Twitter. 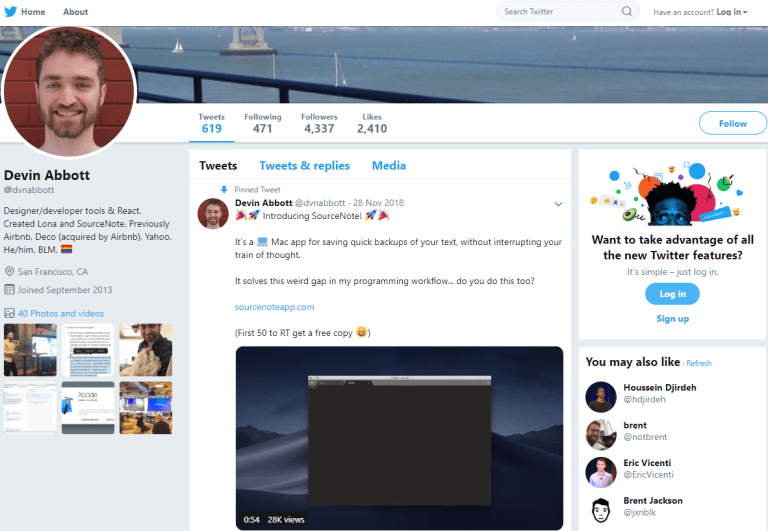 Devin Abbott is considered as a React Native legend. He is a former Airbnb engineer who has founded the Deco Software, a React Native developer tools software company. He is also an author of many parts of the official React Native documentation. Devin published plenty of useful resources for React and React Native. One of them is Fullstack React Native – a fantastic guide to React Native in the form of an e-book. You can visit his blog site or follow him by his twitter account. Visit Tutorial Site and Visit Twitter

Now we came to the ending point of this article. We hope you have enjoyed the article and gain knowledge about React Native learning sources. If this article really assists then please share it, leave a comment on the comment section or give us a good rating. That is all for today. Have a nice day, keep in touch.